"She has a killer combination of immaculate technique, extraordinary musicianship, finely crafted rhythmic exactness, superior ears, lyrical refinement, and the ability to be adaptable and play with ease not just in a wide variety of musical styles but in a similarly wide variety of ensemble configurations, and she does all of this with apparent ease." - Dr. Thomas R. Erdmann (Front Cover Writer - Saxophone Today)
​ 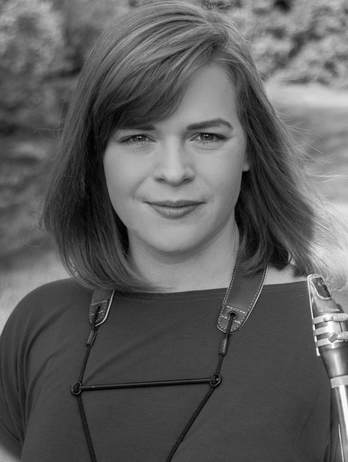 Dr. Emily Jane Loboda is an accomplished solo saxophonist, chamber musician, and educator.  Her passion for performing and teaching is evident in her numerous musical projects and positive student feedback.  Her desire to create inspired and meaningful music can be seen not only in her solo performances, but also in chamber performances with her saxophone duo, Silver Lining.
​
Emily has performed as a soloist with orchestras in Tennessee, Michigan, and North Carolina; and has been heard as a soloist and chamber musician throughout the world including performances in China, Illinois, Missouri, Ohio, Colorado, Tennessee, Texas, and Virginia. She was the state winner for the 2014/2015 North Carolina MTNA Young Artist Woodwind competition, winner of University of North Carolina at Greensboro's 2016 Concerto Competition, and winner of Central Michigan University's  2014 Concerto Competition.   Previously, she was a semi-finalist in the 2016 North American Saxophone Alliance quartet competition, semi-finalist for the Plowman Chamber Music Competition in 2011, the state winner for Tennessee Music Teachers Association Conference in 2011/2012, and was selected as alternate for nationals at MTNA Southern Division.

Classical saxophone is not Emily's only focus. She also is active on the professional jazz scene in North Carolina and Tennessee. She studied jazz with Chad Eby and is a member of the Winston Salem's Camel City Jazz Orchestra.  She was awarded an assistantship for summer 2016 to study with acclaimed saxophonist Branford Marsalis.

Emily will soon be residing in the Nashville metropolitan area in Middle Tennessee. She will be leaving her position of 5 years as the  Adjunct Professor of Saxophone at East Tennessee State University in Johnson City, Tennessee to focus on her family and private studio.  She received her Doctorate in Musical Arts in performance, with minor areas in jazz and music education studies from UNCG. She holds degrees from Central Michigan University and Tennessee Technological University.  Her teachers include Phil Barham, John Nichol, Steve Stusek, and Chad Eby.